A church better at making friends than enemies 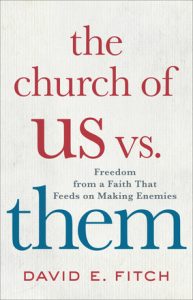 In David Fitch’s timely new book, the church of us vs. them: Freedom from a Faith That Feeds on Making Enemies, he identifies the fodder that fuels the church’s “againstness,” and gathers kindling for a blaze of love toward both those inside the church and out.

Fitch begins with a (mercifully short) survey of the need for the book. Anyone not aware of the polarization both within the church and in our culture has either been off the grid in Montana for the last 40 years or has Comcast for a service provider.

In chapter two, Fitch surveys the parts in Christianity of what he calls the “enemy making machine.” One element—banners—are those beliefs that may have little real effect on our daily lives, but function as a way of separating “us” from “them.” Another element is the human tendency to create enemies as a way of simplifying the world and as a way to feel superior to others.

Fitch looks at church history and theology to show how these elements have animated the hostility both within the ranks of the church and towards outsiders. One example is the Protestant emphasis on “praying the prayer” (the prayer of conversion). The prayer marks a person as “one of us,” regardless of life change and real conviction. It separates Christians from anyone who has never said the prayer (whether they are Christians who see conversion as a gradual process or non-Christians who may be moving toward faith). 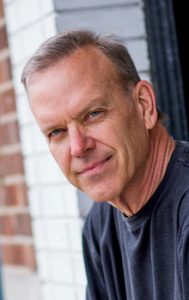 Throughout the book, Fitch traces the life of a Christian named Justin who goes from a black and white, staunchly boundaried version of Christianity to a delight in God’s work in the world, and a curiosity as to how to participate with God. This re-narration of what Christianity is (far more robust that what I can describe here), is one of the best gifts of the book.

Fitch ends the book with a vision of how God intends the church to model a new way of human relationships. Rather than identities based on who we are against, the church is a reconciled body animated by love and our passion for God’s in-breaking, unifying reality. Along with scripture, Fitch envisions an extremely happy ending for the world. The wisdom in this book will help all of us join in God’s good work toward that joyful end.